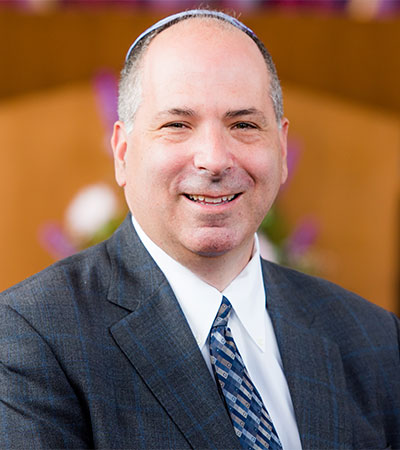 It is important to Rabbi Nosanchuk that members of the community join him in advocacy against virulent hatred and antisemitism and develop ties to the State of Israel by traveling to Israel with him to see the Jewish State with their own eyes. For several years, Rabbi Nosanchuk served on the American board of NATAL: Israel’s Trauma and
Resiliency Center, an apolitical Israeli non-profit that provides assistance to help people in Israel cope with trauma and stress due to the hostilities faced in the Middle East.

Previously to Cleveland, Rabbi Nosanchuk served as Senior Rabbi at Northern Virginia Hebrew Congregation in Reston, VA and Associate Rabbi at Baltimore Hebrew Congregation in Baltimore, MD. While a student, he was mentored by the foremost liturgist of Reform Judaism Rabbi Chaim Stern, z’l, at Temple Beth El,  in Chappaqua, NY, and served a monthly pulpit at Temple Beth Shalom in Bozeman, MT.

Since his 2001 ordination at Hebrew Union College – Jewish Institute of Religion, Rabbi Nosanchuk has been known
for building and sustaining deep-rooted personal connections to members of the communities he has served, especially mentoring young leaders of the community. He also earned recognition through the Washingtonian Award in 2009 and the Best of Reston Award in 2009 for path-breaking interfaith work between the Jews and Muslims.

Here in Cleveland in 2011, he co-chaired “Out of Many, One: An Interfaith Remembrance of the 10th anniversary of September 11 . In 2017-18, with Pastor Richard Gibson, he served as one of the co-chairs of Greater Cleveland Congregations. At GCC’s founding assembly, Rabbi Nosanchuk stood proudly by Rabbi Joshua Caruso, a founding co-chair of GCC, telling the Cleveland Plain Dealer that GCC was best positioned to “rise against the tide of a despairing Cleveland.” In addition to his leadership in GCC’s work on criminal justice, he has also been a vocal champion in Ohio for reproductive rights. As recently as 2021 on Rosh Hashanah, he focused on the importance of learning about and advocating for abortion rights. In various communities where he has served, Rabbi Nosanchuk has been an outspoken leader against gun violence and in 2013 delivered his Yom Kippur sermon at Fairmount Temple while wearing a pierced police body vest to demonstrate how important it is to combat gun violence.

In 2019, Rabbi Nosanchuk completed post-graduate training in Counseling and Spiritual Wellness at John Carroll University in counseling and spiritual wellness. That year, he was also honored as our Senior Rabbi with a wonderful celebration honoring his first ten years as our rabbi, including a tribute book and the seed funding of the Tamid Initiative, a new path for engagement of young adults in temple life.

Rabbi Nosanchuk holds a Master’s Degree in Jewish Communal Service (1994) and a Master’s Degree in Hebrew Literature (1999) from Hebrew Union College – Jewish Institute of Religion and in 2019, and he was awarded an honorary doctorate in Jewish non-profit management from HUC-JIR, in appreciation and honor of his more than 25 years of service as a Jewish communal leader. Rabbi Nosanchuk’s previous education was at the College of Arts and Letters at Michigan State University where he received a Bachelor of Arts with Honors.

A devoted spouse to Joanie Berger, he is a very proud father to two children, a young professional in Washington, D.C., and a high school student in Cleveland.  Since 2019, Rabbi Nosanchuk has been leading our synagogue while simultaneously in medical treatment. He devotes a great deal of time to raise awareness about and support increased funding for cancer research at the Cleveland Clinic, and is passionate about saving lives, and improving the quality of life for people living with cancer. Rabbi Nosanchuk is grateful for strength of our community, his family, and wonderful medical caregivers and researchers in his fight against metastatic melanoma and he intends to add one more credential to his bio as soon as possible: cancer survivor. 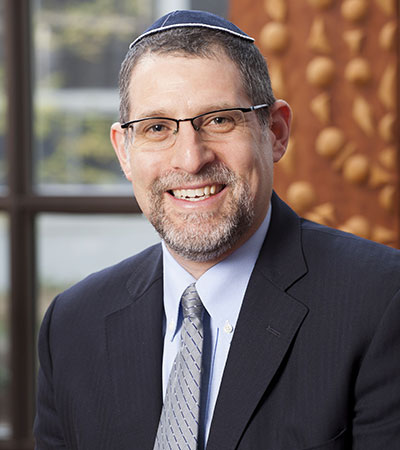 Rabbi Joshua Caruso (he/him/his) has served Anshe Chesed Fairmount Temple’s clergy team since 2002. Ordained from the Hebrew Union College-Jewish Institute of Religion (NY) in 1998, Rabbi Caruso is proud to teach, preach, pastor, and personally engage in the practice of lifelong learning. He has officiated at numerous lifecycle events for generations of our community members at temple. It’s his joy to share in these moments.

Rabbi Caruso sees social justice as an integral part of his rabbinate, bound up with the long and storied legacy of Fairmount Temple. He was inspired to bring Congregation-Based Community Organizing to Cleveland, first introducing it to temple leadership and nurturing its growth among its members. In 2011, his efforts led to the formation of Greater Cleveland Congregations (GCC), a coalition of more than 30 diverse faith communities from across Northeast Ohio committed to bringing social and racial justice to the fore. GCC is now the most powerful faith-based citizens’ voice in Northeast Ohio.

In addition to serving on the Strategy Team of GCC, Rabbi Caruso sits on the Cuyahoga County Citizens’ Advisory Council on Equity, is a member of the Commission on Social Action for the Religious Action Center of Reform Judaism (RAC), and serves on the Core Team of RAC-Ohio, a state-based justice project representing Reform Jews throughout the State of Ohio.

Rabbi Caruso is blessed to share life’s journey with his wife, Leah, and their children, Harper, Asher, and Shayna – all proud members of Fairmount Temple’s sacred community. 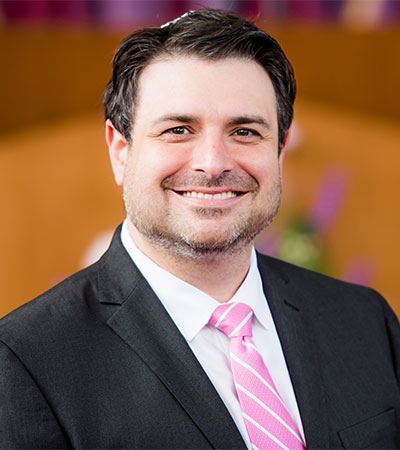 Cantor Lapin, who has served as cantor at Temple Beth-El in Great Neck, NY, previously served as the cantorial intern at B’nai Jeshurun Barnert Temple in Franklin Lakes, NJ, and student cantor at Congregation Beit Simchat Torah in NYC.

He received his cantorial ordination from Hebrew Union College-Jewish Institute of Religion’s Debbie Friedman School of Sacred Music, from which he also holds a master’s degree in Sacred Music. He holds a bachelor’s degree in Journalism and Public Relations from Temple University in Philadelphia and a graduate master’s diploma in Vocal Performance from The Mannes College of Music in New York City.

Cantor Lapin is the founder of Music at TBE, an annual concert series devoted to bringing Jewish and secular music to audiences in the Great Neck community. He has collaborated with wide ranging artists including: Nava Tehila, Elana Arian, Nefesh Mountain, Gabrielle Stravelli, Cantor Benjie Ellen Schiller, Alexandra Joan, Steve Sandberg, and many others. Cantor Lapin is an active member of the American Conference of Cantors (ACC); he joined the ACC Executive Board in 2019 serving as chair of their fundraising committee. An active recitalist, he has performed in sacred and secular music concerts throughout North America, Israel and Europe. To learn more about Cantor Lapin, click here to watch a video and here to visit his website.

He and his wife Rabbi Elle Muhlbaum are excited to be part of this historic and vibrant faith community.

“I am excited to build sacred connections, one relationship at a time,” Lapin said in an email to the Cleveland Jewish News. “I look forward to begin leading this sacred community into the next chapter of its history.” 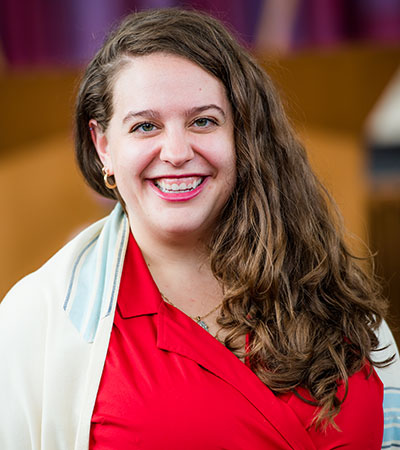 Following her ordination, Rabbi Muhlbaum served first as the Assistant Rabbi and head of religious school, and then as the Associate Rabbi at Temple Beth-El of Great Neck in New York. While a rabbinical student, Rabbi Muhlbaum served as the rabbinic intern at Temple Sinai of Bergen County in Tenafly, NJ, as well as the student rabbi of United Hebrew Congregation in Terre Haute, IN, and Mount Sinai Congregation in Texarkana, TX. She was also the Jewish Foundation Fellow and rabbinic intern at Cedar Village Retirement Community in Mason, OH. Additionally, she served as the Assistant Limud Director at URJ Eisner Camp in Great Barrington, Massachusetts, where she also served for four summers as a faculty member.

Rabbi Muhlbaum is the recipient of the Emanuel Green prize for proficiency in Midrash and Hebrew, the Rabbi Sarah Messinger prize in Leadership, the Be Wise fellowship, and the AIPAC Leffell Israel Fellowship.

Rabbi Elle Muhlbaum is married to Cantor Vladimir Lapin, and together they are delighted to parent two adorable children and their dog, Gus. 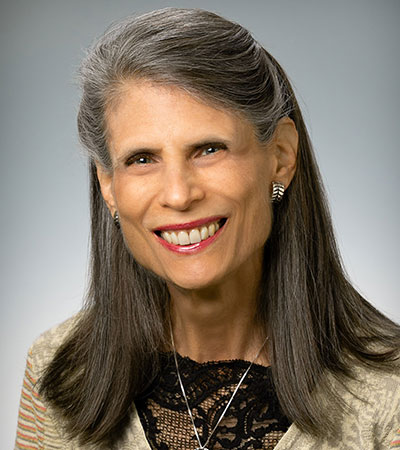 Her stirring charge to the 1993 Biennial Convention of the Women of Reform Judaism in San Francisco, “Sarah’s Hidden Voice: Recovering and Discovering Women’s Spirituality,” resulted in WRJ undertaking the project of a transformative publication, The Torah: A Women’s Commentary (published in 2007), which has engendered feminist commentary and a growth in interpretations and scholarship. Cantor Sager “charged” the women of our Reform movement with the goal of “uncovering and recovering women’s voices from our tradition and enable women to interact freely with our sacred texts in the future.”

Cantor Sager has been honored for her contributions to the Jewish community and for her spiritual leadership by the State of Israel Bonds, and the Commission for Women’s Equality of the American Jewish Congress. She is proud to have served on movement-wide commissions on Synagogue Music and on Worship, Music and Religious Life. 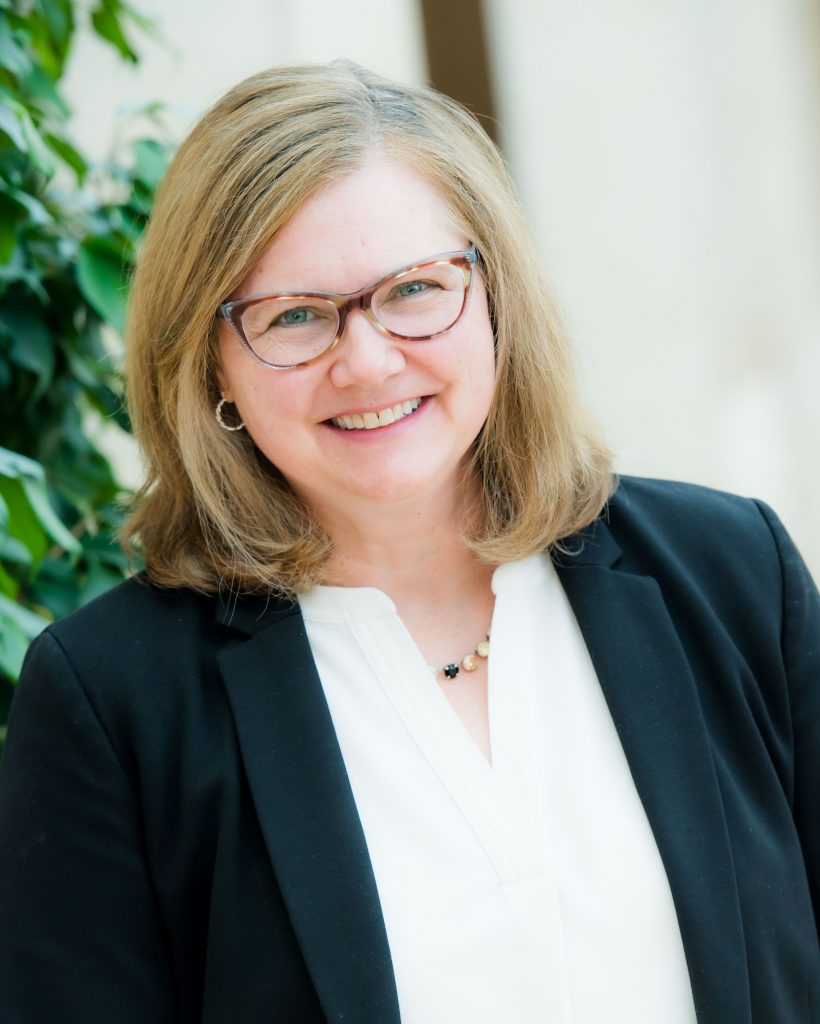 Julianna Johnston Senturia, who joined the Fairmount Temple staff as Executive Director in August, has more than 25 years dedicated to the non-profit sector and Jewish communal life, most recently as Executive Director for the Heights Schools Foundation. Prior to that, Julianna was a member of the Fairmount Temple staff as a Hebrew teacher and Religious School curriculum consultant and Coordinator of Lifelong Jewish Engagement. She served on Shaker Heights City Council for eight years and her volunteer commitments include board positions with the Shaker Heights League of Women Voters, Cleveland Jewish News Foundation, and Shaker Heights Development Corporation. Julianna earned a Master of Nonprofit Administration from John Carroll University, and a Master of American Policy & Women’s Studies, and a Bachelor of Political Science, both from Ohio University.

Give Julianna a call or email her as she would love to tell you more about Fairmount Temple. 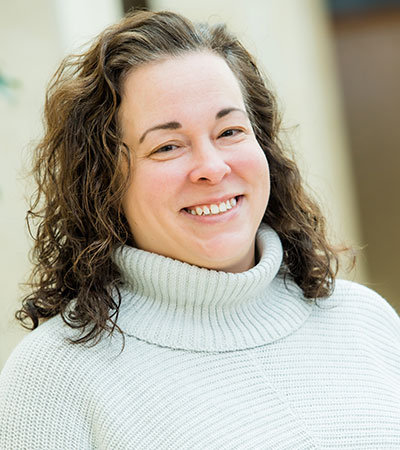 Staci Cohen grew up at Fairmount Temple and since 1998 has been working in various capacities in our Religious School, most recently as Upper School Director. A graduate of Ohio University with a degree in Secondary Education with a concentration in English, Journalism and Communications, she earned her Master’s from the Siegal College of Judaic Studies with a focus on Jewish Education. She also earned the title of Reform Jewish Educator (RJE), conferred by our Reform movement. She is passionate about her work mentoring and engaging our teens and will work full-time to engage all of our teens in synagogue families. 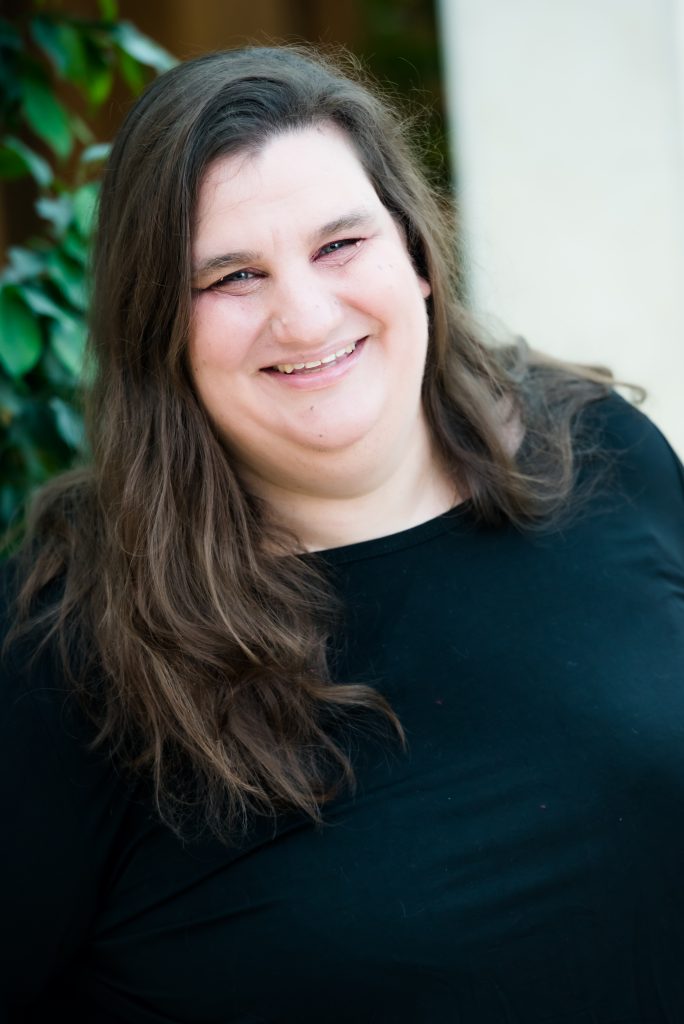 We welcome Erika as our newest team member! After graduating from Towson University in Maryland, Erika Eskenazi started her career working for the Regional Infant Hearing Program in Cambridge, Ohio. Throughout her career, Erika has kept one thing consistent – building relationships and community. She did this successfully as the Education Director at Beth Sholom-Chevra Shas in DeWitt, New York, as head of the Children Family and Camp department at the Virginia Beach Jewish Community Center, and Senior Regional Director of Delta BBYO. Most recently, Erika was director of the KinderCare University Circle for the Cleveland Clinic. Erika, who joined our staff in October, 2022, is eager to help our ECC children thrive in our ECC and as well as engage with all of our synagogue families with preschool-aged children.