On February 28, 1842, 30 families in Cleveland, Ohio, formed the “Anshe Chesed Society” with Rev. Asher Lehman as “Rabbi.”   By 1844, 22 students were busily studying both Jewish and secular subjects in Anshe Chesed’s day school.  Education was (and remains) a top priority.

By 1846 this society boasted 47 families and merged with the original Israelitic Society.  On October 6, 1845 the cornerstone of Cleveland’s first house of Jewish worship was laid.  The structure, built on Eagle Street at a cost of $1,500, was officially dedicated on August 7, 1846.  A dedication speech in English, a concession to modern times, urged congregants to live in “bonds of charity with all mankind.”  Anshe Chesed had grown to more than 80 families and, with more than 85 students, the congregation hired its first full time trained rabbi, Isidor Kalisch.

In 1860, the Eagle Street edifice proved too small for the expanding congregation and the synagogue was enlarged.  Rabbi Isaac Mayer Wise, “The Master Builder of Reform Judaism,” delivered the address of rededication on December 14, 1860.   In 1876, Rev. Dr. Michaelis Machol, a graduate of the University of Breslaw, was hired to lead the congregation.  During his tenure, the congregation adopted a moderate Reform prayer book, abolished second day holiday observance, and voted to worship with uncovered heads.  Dr. Machol was the first rabbi to deliver some sermons in English.  He would preach in German on Friday nights and in English on Saturday mornings.  Eventually, all sermons were delivered in English.

In 1886, the cornerstone for a new larger building was dedicated at a site on Scovill Avenue at Henry Street.  The ceremonies attracted more than 4,000 Clevelanders with Rabbi Isaac M. Wise returning once again as the principal speaker.  The building was completed in 1887.   Rev. Dr. Machol became Rabbi Emeritus in 1907 when Rabbi Louis Wolsey, the first American-born leader of Anshe Chesed, arrived from Little Rock, Arkansas.  He had been a student of Rabbi Isaac Mayer Wise and was the first Hebrew Union College ordinee to serve as Anshe Chesed’s rabbi.  Rabbi Wolsey’s 18 years of service with Anshe Chesed were distinguished by a tremendous increase in the size of the congregation, the exercise of a considerable influence in Jewish communal affairs, added reforms in the worship service and the adoption of the Union Prayer Book.

During this time the congregation also acquired the Euclid Avenue site, created a religious school, and formed the Sisterhood (1909), Men’s Club (1924), and Young People’s Youth Group (1911).  In 1910 the first cornerstone was laid at East 82nd and Euclid Avenue. The handsome new structure became a Cleveland landmark.  Dedication ceremonies took place on March 22, 23 and 24, 1912.  Ten rabbis, as well as ministers from various Cleveland churches, delivered addresses.

arrived in 1925 from Holy Blossom Temple in Toronto.  Rabbi Brickner represented the new Reform rabbi of the 1920s and 30s who wished to restore more familiar traditions within the framework of Reform Judaism.  Rabbi Brickner reinstated the Kiddush at Friday night Services, Kol Nidre on Yom Kippur, the Yizkor Service, the blowing of the Shofar on the High Holy Days, the celebration of Simchat Torah, and Consecration of First Grade children during Sukkot (1929).  Rabbi Brickner held the first Annual Clergy Institute in 1935 to strengthen interfaith relations with the community and minimize prejudice and anti-Semitism.  One of Rabbi Brickner’s primary concerns was Jewish education. He created the position of Director of Education in 1926 for Daniel Pearlman to administer the Religious School. 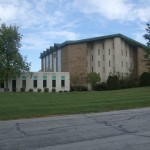 As Anshe Chesed’s members moved further into the Eastern suburbs following World War II, it became apparent that a new synagogue location needed to be found. In 1948, a 32-acre site on Fairmount Boulevard was purchased. After a long zoning battle that went all the way to the Ohio Supreme Court, the City of Beachwood approved the construction of Anshe Chesed’s present home which was dedicated on May 31, 1957. At that same time, the Nursery School was organized. Tragically, Rabbi Brickner was fatally injured in an auto accident in Spain in 1958. His wife, Rebecca, remained active at Fairmount Temple for many years after his death.

Rabbi Arthur J. Lelyveld, then the National Director of the B’nai Brith Hillel Foundation and leader in the American Jewish Congress, was hired as the new rabbi of Fairmount Temple.  During his tenure as Senior Rabbi, he became President of the Central Conference of American Rabbis, the Synagogue Council of America and the American Jewish Congress.  A leading orator, Rabbi Lelyveld also became active in the Civil Rights movement of the 1960s and was active in promoting positive interfaith relations.  Many innovations took place during his tenure, including the Selichot Service (1959), the Bloch “Sacred Service” (1959), the Confirmation Chain of Tradition (1959), the Brickner Lecture (1959), the Selichot Institute (1976), as well as the use of Gates of Prayer (1977) and Gates of Repentance (1979).  In 1980, Rabbi Lelyveld hired Cantor Sarah Sager, the first woman to serve as Cantor of a Cleveland synagogue, who has gone on to serve the synagogue’s membership for more than four decades. Previous outstanding music directors and soloists included James H. Rogers, Maurice Goldman, Erwin Jospe, Reuben P. Caplan and Sam Levine. By the time he retired in 1986, Rabbi Lelyveld had authored several books and was an internationally-known lecturer and teacher. He died in April 1996.

In 1986, Stuart A. Gertman succeeded Rabbi Lelyveld as Senior Rabbi of Anshe Chesed followed by Rabbi David Gelfand. During Rabbi Gelfand’s tenure, he served as president of the Cleveland Board of Rabbis, national officer of the Interfaith Alliance and of the Cleveland Jewish Federation. He had a strong interest and commitment to social action and interfaith activities and increased the programming of the synagogue. His tenure included the 150th anniversary of the congregation. After nine years of service, he was succeeded by Rabbi Lee T. Bycel and later Rabbi Howard Ruben. 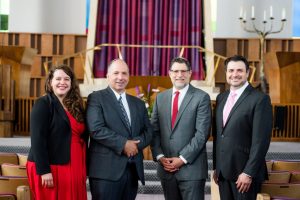 In 2010, Robert A. Nosanchuk (second from left) joined Anshe Chesed as its Senior Rabbi, having previously served as Senior Rabbi of the Northern Virginia Hebrew Congregation in Reston, VA.  Rabbi Nosanchuk was installed in December of 2010 in a ceremony presided by the leading rabbi of the Reform movement, David H. Ellenson, President of the Hebrew Union College – Jewish Institute of Religion. Rabbi Nosanchuk serves as Vice-Chair of the Reform Movement’s Commission on Lifelong Jewish learning, and has worked closely with his clergy colleagues and our staff to develop new lifelong learning seminars, worship programs, Shabbat retreats, Israel trips, and Hineni, our independent study program for students in 7–12 grade whom Monday evenings don’t work.  He now leads a clergy team that includes Rabbi Joshua Caruso, Cantor Vladimir Lapin,  Associate Rabbi Elle Muhlbaum.  Also part of the Fairmount Temple clergy is Cantor Laureate Sarah Sager  who in 2022 was honored for her 40+ years with Fairmount Temple and continues to serve congregants in a variety of ways.

Since May 1992, Anshe Chesed Fairmount Temple has been entrusted with a Holocaust Torah scroll. It is on permanent loan from the Memorial Scrolls Trust (MST) of the Westminster Synagogue, in London, England. Our Torah, #404, is originally from Melnik, Czechosolvakia. To learn more about the scroll and see a photo, click here.. To learn more about the Memorial Scrolls Trust, click here.

Anshe Chesed is a founding institution of Greater Cleveland Congregations, a multi-faith coalition involving more than forty synagogues, churches and mosques, organizing to improve life in the region.  Our clergy leaders continue to study in areas of their interest, and work collaboratively together to serve the pastoral, educational and liturgical needs of our community, and to foster an environment where all feel welcome, and engaged in the life of our historic community.