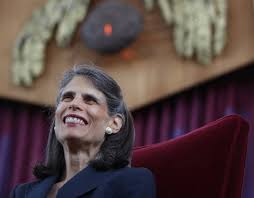 This post on “If Not Now, When?” the interactive blog of Anshe Chesed Fairmount Temple, is adapted from the remarks of Cantor Sarah Sager at Shabbat Worship at Anshe Chesed Fairmount Temple on Friday, August 22, 2014. Cantor Sager shared her experiences in her January trip to South America, and previewed some of the exciting plans in store in an upcoming tour she plans to lead for Fairmount Temple members to Ecuador, Machu-Pichu and the Galapagos Islands in October, 2015. We encourage you to respond with questions or comments below, to repost this to friends on social media and to email the link to others, who you think might like to learn more about Cantor Sager’s experiences traveling in South America. For further information about the upcoming tour next fall 2015, please contact Iris Greene in Cantor Sager’s office at 216-464-1330 or igreene@fairmounttemple.org.

How manifold – how remarkable in sheer volume and variety are Your creations, Adonai; All of them in Your wisdom – You fashioned.

These words from our prayer service, these words that set the tone of our worship by praising the Source of all Creation, played over and over in my head this past January as I travelled in Peru and Ecuador and experienced the wonders of some of the most remarkable places on this earth.

I cannot fully explain what impelled me to go.  I certainly was not thinking about it when I received from Ayelet Tours a promotional invitation for clergy to participate in a familiarization tour of Peru & Ecuador, including visits to the Jewish communities of both those countries.  I remember being immediately attracted to the somewhat exotic names of Machu Picchu and the Galapagos and by the promise of a small discount for rabbis and cantors (I do love a bargain!) As a teenager, I had read Irving Stone’s book, The Origin, and remember being fascinated by the story of the development of Charles Darwin’s theories of natural selection, evolution, and the survival of the fittest in The Origin of the Species and the painstaking research he did in the Galapagos Islands that helped shape his thinking.  I don’t think I even knew what Machu Picchu was – except that I recognized the name and loved the sound of it!  The promise of adventure – with a Jewish component – was enough to provoke a second look before deleting.

Upon close inspection of the details, however, I discovered that the dates were less than ideal.  Nevertheless, for some reason, I shared the information with Rabbi Nosanchuk and expressed both my interest in the trip and my understanding that it would be impossible to go, given the rest of my travel schedule, including the Fairmount Temple Trip to Israel just before and a Spirituality Retreat immediately after.  Of course, never one to pass up a rich opportunity or one that might redound to the benefit of the congregation, his immediate response was: “Why not?”  Without much further deliberation, I signed up!

It struck me, immediately upon landing in Lima, Peru, that the whole vast continent of South America was unknown and unfamiliar to me.  I wondered at myself and my ignorance.  As the marvels of that part of the world began to unfold, I became increasingly grateful that I had finally taken the first step to correct that lapse.  While each day had its special discoveries, the three highlights for me were our visits to Machu Picchu, the Jewish Community of Quito, Ecuador, and the Galapagos.

The trip to Machu Picchu was a great thrill!  We travelled first by train from Cuzco through the magnificent Urubamba Valley along the Inca Trail to the foot of Machu Picchu.  We were guided up the “old peak” (the meaning of Machu Picchu) to the heart of what is known, erroneously, as the “Lost City of the Incas.”  It was never lost to the indigenous population but it was undetected by the Spanish during their conquest of Peru in the mid- 16th century.  Machu Picchu was first introduced to the outside world when the American historian, Hiram Bingham, discovered it in 1911.  Since the site was not known to the Spanish, it is highly significant as a relatively intact cultural example of the Inca civilization.  Most archeologists believe that Machu Picchu was built as an estate for the Inca emperor Panchacuti (1438-1472) at the height of the Inca Empire, around 1450 c.e.  Nevertheless, there are those that believe Machu Picchu was built as a sacred religious site.

Even without knowing the researcher’s reasons for hypothesizing its religious nature, I can easily understand how the other-wordly quality of the place suggests that.  It is isolated.  It is laid out in terraces on a mountain that is almost completely encircled by the Urubamba River, which the Inca named the Vicamayo, or Sacred River.  It was also pointed out to us that the rising & setting of the sun – which is an Incan god – when observed from certain locations on top of Machu Picchu, aligns with religiously important mountains during solstices and equinoxes.  The layout, architecture, and ambience of the site is not only beautiful, the views from all sides, and especially at the summit, are breathtaking.  It feels as if one can actually reach out and touch the heavens.  In fact, one of the participants on the trip was a conservative rabbi, Edward Feld, who is a scholar and the editor of the new Conservative prayer book.  He and I were the only ones in our group who climbed to the very highest summit of Machu Picchu.  When I was ready to go back down to re-join the group, he asked if I might let them know that he would be another few minutes as he was going to daven mincha, he was going to pray the afternoon service.  To which I replied: “I thought that’s what we’ve been doing all afternoon!”

It felt like a religious experience just to be there, to soak in the natural beauty of the surroundings, to climb the steps and walk the paths that those of a very different culture and outlook walked over 5 centuries ago, to wonder that the Inca Empire rose to great heights in a short period of time and then was gone – vanquished by the Spanish Conquest; to feel the mystery of both its seclusion and its singularity, to be touched by its purity, to marvel at the civilization represented in its buildings – all of which were built out of blocks of stone cut in such a way that the stones fit together tightly without mortar.  Some of the construction of the buildings in the center of Machu Picchu is so perfect that it is said not even a blade of grass fits between the stones.  In 2007, Machu Picchu was voted one of the New Seven Wonders of the World in a worldwide Internet poll.  It felt as if we were suspended in a magical place, somewhere between heaven and earth.

We flew from Cuzco to Quito, Ecuador where, on Erev Shabbat, we gave thanks for God’s creation at another miraculous site: The Sinagoga Comunidad Judia del Ecuador, the Synagogue and Jewish Community of Ecuador where we went for Shabbat Evening services and a lovely Shabbat dinner after.  Before services started, we had the privilege of touring the magnificent campus that houses what we would consider the JCC complex with a library, meeting rooms, a Day School, and a Social room where the Zionist Youth movement meets.  This is all adjacent to an impressive synagogue building with a beautiful sanctuary and similarly lovely community room or social hall where dinner took place.  The entire campus would be remarkable under any circumstances but what made it miraculous, in my mind, was that this is all the creation of and for a Jewish community of 600 people – not families, but 600 people.  Three individuals, in particular, were responsible for designing the complex, financing the project, and building the multi-million dollar facility that would be a gem in any Jewish community in the United States.  I actually met, by chance, the builder and his wife and had a lovely conversation with them.  They were warm and welcoming and the pride they took in “their” building was palpable.

At dinner – which was a sumptuous meal – I had the opportunity to visit with other members of the community which will also be an important part of our Fairmount Temple trip.  They spoke proudly of their school, of plans for a senior center, of their hopes that more Jews might make their way to Quito, and of the details of their family and personal lives.  As we boarded the bus back to our hotel in the cool night air, it was hard to believe we were 15 minutes south of the Equator, in the Andes Mountains on the edge of the Amazon Rainforest, with a Jewish community that felt very much like home.

Ma raba maasecha Adonai. How infinitely interesting are your creations, Adonai, in your wisdom you have fashioned us all.

We flew from the heights of Quito to the Galapagos Islands off of Ecuador’s Pacific Coast and found ourselves in another magical world, a place where God’s handiwork is evident in such a primal, visceral, awe-inspiring way that there were times when I felt we were witnesses to Creation itself.  I had never seen the sky so breathtakingly, gloriously blue and, by learning to snorkel, I had the opportunity to observe, first hand, the wonder that goes on beneath the surface of the ocean.  The colors of underwater life – the blues, yellows, golds, purples, silvers, reds and oranges were vibrant.  There were those in our group who saw small sharks and tortoises under water.  I was not so fortunate, but their excitement was contagious.  Every night of the four day cruise I could see the moon shining on the water from the window of my room.  It is another unforgettable image that I carry with me as a kind of evening benediction: “Blessed are You, Adonai our God, Creator of day and night. You roll light away from darkness and darkness from light… you bring on the evening.”

While our accommodations were spacious and comfortable, the ship was not luxurious – which felt exactly right.  The food was good and plentiful, the service was excellent, the staff exceedingly responsive, but the main concerns of this cruise were essentially three: appreciation, conservation, and safety.  The guides were knowledgeable, patient and generous as they shared with us the details of this archipelago of volcanic islands and pointed out examples of the many animal species that populate them.  The sea lions, prehistoric iguanas, bright orange crabs, and blue footed boobies became almost commonplace.  We saw, as well, penguins, Darwin’s finches, great blue herons, a rare owl, lizards and, of course, the Galapagos tortoise, the largest in the world.

Ma raba maasecha, Adonai…. How numerous and infinitely fascinating are your creations, Adonai.

The Galapagos Islands and their surrounding water not only form a separate Ecuadoran province, they also constitute a national park, and a biological marine reserve.  Ecuador was not always careful about the fragile ecosystem of the Galapagos.  In recent years the government has become much more serious about preserving this national – and world – treasure.  Access to the islands is severely restricted so no ship knows exactly what its itinerary will be until it is about to embark.  It seemed that the entire staff and crew felt responsible for caring properly for the islands.

Every time we acknowledge the wonder, majesty, magnificence, and diversity of Creation we, in effect, are pledging the same commitment to care for God’s earth.  I would relish the opportunity to share with each and every one of you the visual, physical, emotional, and true spiritual adventure that awaits us in this very special part of God’s vast Creation.